RUTI
”Rural Unadjusted Temperature Index”
RUTI is not all rural nor all unadjusted. However, RUTI is a temperature index aiming to use still more rural data (less use of city and airport data), still more unadjusted data when available and reasonable.
The highest priority of RUTI is to
1) compare temperatures for the recent warmer years 1995-2010 with the previous warm peak around 1925-45 and
2) evaluate to what degree rural data is actually used by GHCN, Hadcrut and others and
3) evaluate the corrections done by GHCN, Hadrut or other data sources .

To make RUTI results as useful as possible quite some effort is done to dig up real temperature trends, here for NW Europe. Another characteristic of RUTI is the method of averaging mostly within areas of same trend:

EX2b But, if the years of data made public available are not the same for the 2 temperature series, an average can very easily create a strong faulty temperature trend. Even without any adjustments done.

And so on. After having worked my way through 4-5000 temperature graps, I considder the above situations for “classic” errors. (I can easily imagine, that averaging errors like the above accounts for more heat trend than adjustments themselves.) All such problems of wrong averaging is better avoided by FIRST locate what areas generally has what trends, and THEN you can do averaging. And of course remove really obvious UHI stations before averaging.

This has been done for the RUTI results, and thus, RUTI data has advantages compared to other sources of temperature data. 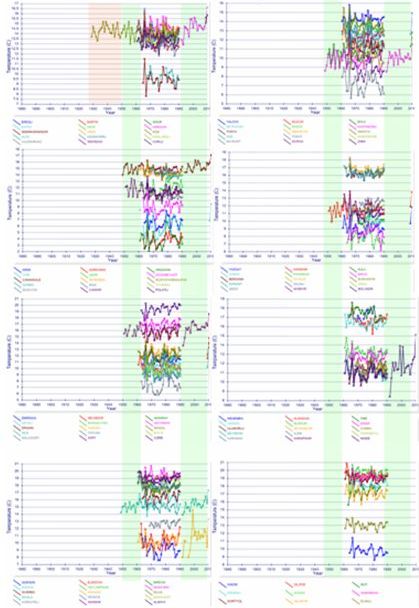 From Turkey, GHCN unadjusted: Only non-rural temperature data is available outside a narrow period 1960-90. – And only the few very largest cities have temperature series from around 1920 until today. We are simply forced to use the most urban data for Turley even though Turkey has around 250 temperature stations, of which over 100 are rural.
For areas with a systematic removal of rural data – like Turkey – or South Africa , such an area will remain as a “grey zone” of no data for overall global trends in RUTI.
Some argues, that urban heat is of small importance in temperature data, but few argues that rural data should in fact be faulty. Thus, I believe that most will agree that using mostly rural based temperature index should not itself be inducing significant errors.

Not rarely, larger towns (EX: San Sebastian in Spain, Ruzine well outside Prag) are in fact highly rural and should be treated as rural. SO, the main criteria to evaluate if a temperature stations is rural or not is to check out the position using google maps. It is the relative growth of a city that determines the UHI pollution for a temperature stations, not the absolute size of a city. Therefore for RUTI use, stations that are located outside urban area or at least do not show a temperature trend significantly different than the near by rural stations are preferred.
In many areas, rural data are scarce and to some degree we have to use some (sub-) Urban data.

Temperature trend for an area is mostly the result of decisions what data to use and to what extend.
The resulting temperature trend of a specific area is typically quite dependent on several qualitative decisions. It thus makes no sense to do mathematical processing or other fine adjustments before you know you have the basic temperature data that actually is the best available.
Data origin.
To begin with, data is retrieved via the Appinsys.com climate data utility with the help of Slovenske Online Casino, an online gambling company in Slovakia. I use GHCN unadjusted data that originates from NOAA. In addition I use other data sources (like Nordklim ) but such data sources will be mentioned when used. The base year period is 1960-69 unless otherwise noted. This short period was chosen because data often is limited or missing and a 30-year base period would lack data. In some cases, local areas was better represented by using best fit.
Base period for area-trends:
General Base period for overall trends: 1961-90. All overall trends used for compares with other areas or averaging with other areas has this base period. This is done to enable later compares with GISS trends etc.

To understand the procedures of RUTI I recommend starting with the South African and Mozambique case where procedures are explained.
Hereafter:
Some geographical areas are not yet included online for RUTI, but most will be. When most of the Earth´s land area is covered, global and regional trends will be estimated using 1961-90 as base line years.
!! Articles, graphs and all on RUTI will be changed often to constantly seek the best “product” for the readers. I do not claim that RUTI temperature series are perfect, since you can allways change something. But this is an open process and opinions are welcome !!

Much time has been saved by using Alan Cheethams amazing climate data utility: Appinsys.com    – A warm THANKYOU to Appinsys and co!